Leicester City took a huge step in their bid to become Premier League champions after beating Swansea City 4-0 at the King Power stadium.

Jamie Vardy was not missed as his replacement, Leonardo Ulloa, netted a brace along with goals from Riyad Mahrez and Marc Albrighton.

Mahrez got the Foxes off to a flyer inside ten minutes after he capitalised on Ashley Williams’ poor clearance before beating Lukas Fabianski with a low drive int the bottom right corner. The lead was doubled after Wes Morgan was fouled on the left and the Algerian, Mahrez, put in a wonderful cross for Ulloa to head home and leave Fabianski stranded.

Leicester secured the points when Jeffrey Schlupp broke away down the left-hand side, just past the hour mark, and left Federico Fernandez for dead and after the ball ricocheting a few times, Schlupp poked the ball into Ulloa’s path and the Argentine striker bundled the ball home for his second and Leicester’s third. Late substitute Marc Albrighton completed the scoring on 85 minutes after some great persistence from Demarai Gray. The young winger ran through the middle of the pitch, gliding past players before finally crossing for Andy King who headed it back down for the advancing Gray, who’s effort was saved but only into the path of Albrighton who scored his first goal since the opening day of the season, funnily enough the last time Leicester scored four in a Premier League game. 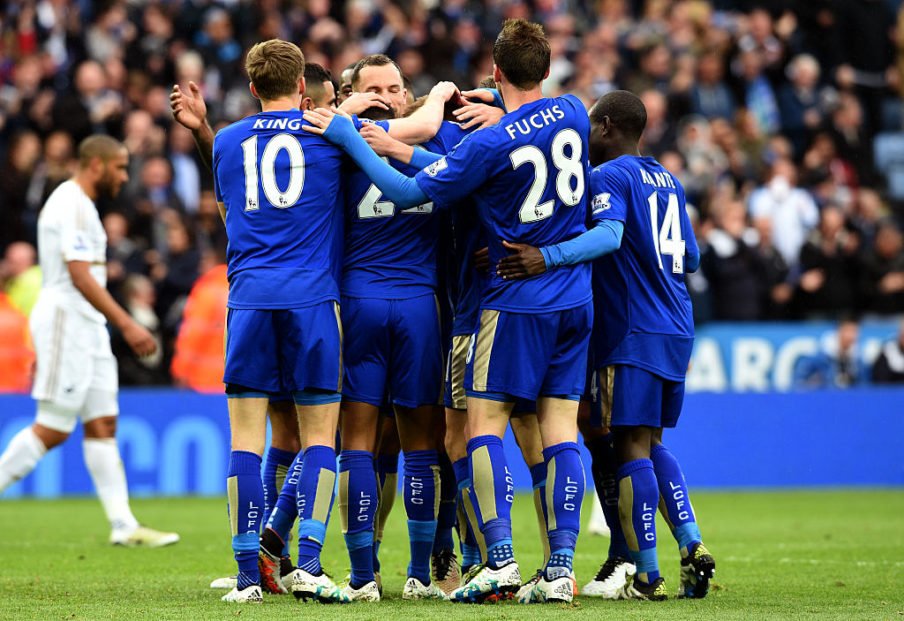 Three of the Foxes’ players will head to the PFA awards tonight; N’golo Kante, Jamie Vardy, and Riyad Mahrez, after all being nominated for the PFA player of the year award along with Harry Kane, Dimitri Payet, and Mesut Ozil. All three of Leicester’s nominees were named in the PFA team of the season last week, along with captain, Wes Morgan.

Will Leicester make history and win the Barclays Premier League?